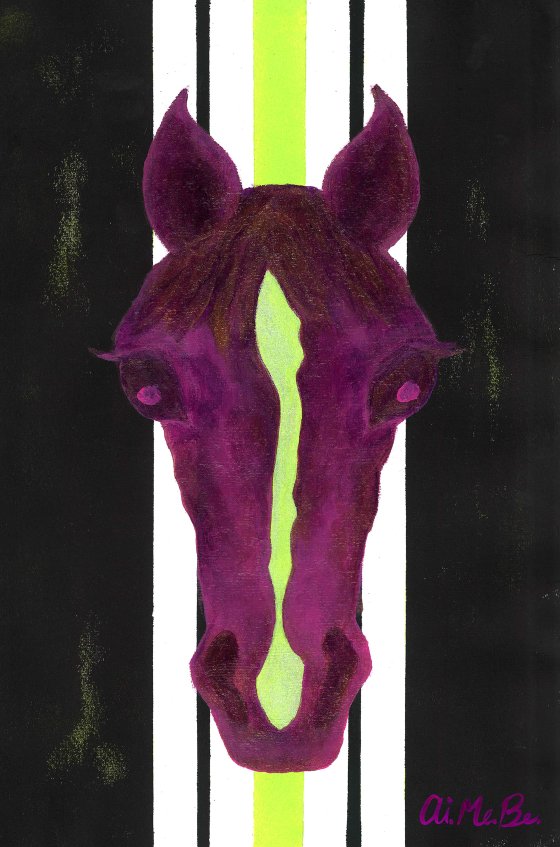 This alternative portrait was inspired by my last equine love – Nikki. I sold her before moving to California years ago but she is forever imprinted on my soul. It is a rescue story, for both of us. I was young and had to put down my previous horse Pink Floyd after he slipped on ice and broke his leg. A few months later my best friend’s mom, Vicki went to an auction and bid on this horse just above the butcher. She was full of diseases, 1/2 the weight she should have been and scared of humans, clearly abused. I fell in love..

An off-the-track thoroughbred, she was my first challenge in training an inexperienced horse to show. We were going to name her Almost Alpo but decided on In the Nikk of Time.  I later found out her racing name was Mim’s Wild Rose. She never won a race, a couple seconds and thirds.. but she was fast enough for me! Sometimes I’d let her run on a trail and boy could I feel when she kicked it into high gear. I would just hold on and hope a deer wouldn’t jump out in front of us. I taught her how to trust people again and soon we were soaring over fences and collecting ribbons at competitions. And what did she teach me? Too much to write about tonight..

Here are two painting I did of her in high school.

Head in the Clouds